by Pernille Rudlin in Globalization, Japanese business in Europe, Management and Leadership, Marketing 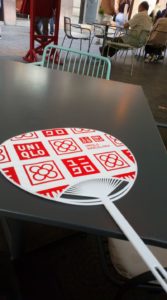 The overseas sales of Fast Retailing, with Uniqlo at its heart, have recently outstripped its domestic Japanese sales.  Although a branch of Uniqlo has opened in Barcelona, to add to stores in the UK, Germany and France, with further openings in Stockholm and Amsterdam to come, according to a recent inverview in the Nikkei Business, what really excites Fast Retailing’s founder, Tadashi Yanai, is the birth of huge middle class markets in China, India and South East Asia.

“At my most optimistic, I think we can be world number 1 in 3 to 5 years.  We are in the best position in the growth markets of Asia.  Although various governments are trying to be protectionist, it is difficult to stop the trend of companies doing business around the world.”

“Manufacturing has to be done in the countries with the lowest labour costs.  Chinese manufacturers are setting up factories in Vietnam, Cambodia, Indonesia, Bangladesh.  And then on to India, the African coast, Eastern Europe.”

When asked about the new concept from Japanese company Start Today – the Zozosuit, which will supply bespoke clothing, with measurements generated by wearing a “Zozosuit”, Yanai said this technology will not be a sufficient differentiator in its own right.  “In the future, IT infrastructure will be common to everyone, and free.  They will have to think hard about how to build up their business model to make best use of that data”.

Fast Retailing has another brand, in Japan only, GU, where RFID tags are in every item, and there are self service check outs, so shop assistants will become more like “concierges”.

“I think only companies that have a positioning that makes sense globally will survive.  Up until now it has been enough to have a positioning in Japan,  and as a consequence, there was pointless competition within each industry.  Now markets are global, being number 1 in Japan is pretty meaningless.”