The annual ritual of picking a cross cultural calendar

by Pernille Rudlin in Globalization 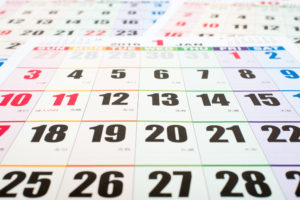 Sorting through the various calendars on sale or that were sent to me for promotional purposes I have ended up choosing the same ones as last year – a haiku and ukiyo-e wall calendar because I like to be reminded of the passing seasons, and a desk calendar that has Japanese and European public holidays on it, for practical reasons.

This annual ritual of picking a calendar reminds me of when I was working at Mitsubishi Corporation in London.  We locally hired staff used to fight to grab the desk calendars from Japan left over from mail outs to customers.  They not only had photos of the beautiful artefacts from the Seikado Museum, but could be easily customised so that three months could be viewed at a time, vital for calculating shipping schedules between Japan and Europe.

The publisher of the desk calendar that I chose also shows three months on one page, but I am thinking of suggesting that they further modify their calendar to make it useful to employees of Japanese companies in Europe, by including indicators of the key dates of the Japanese financial year.

Over three quarters of the biggest Japanese companies in Europe run on an April 1st to March 31st financial year in their Japan headquarters.  The dates for reporting results and shareholders’ meetings in Japan are highly predictable and tend to be clustered by industry.  But the annual cycle of proposals and decision making that this sets up, and the midterm plan 3 year cycle that many Japanese companies also adhere to, are not widely understood in Europe.

The majority of European companies run on a calendar year of January to December.  But even when the calendar year is used, the dates of when the results are announced or the Annual General Meeting is held vary from company to company by weeks and even months.

European employees therefore need to be actively reminded of key meetings and decision deadlines in Japan headquarters as they do not instinctively know the rhythm of the April to March financial year and it often does not match the rhythms of the British business year.  In fact one British retailing company acquired a few years’ ago by a Japanese company found it very hard to comply with the Japanese HQ’s request that they submit all their year end accounts by December 31st (in other words the day their financial year ended), so that the Japan HQ could compile the consolidated accounts in time for Japan’s March 31st year end, because this coincided with the UK’s busiest time of year – the Christmas shopping period.

The Japan HQ have in fact changed their financial year to January to December a couple of years’ ago, giving the need to be more global as the reason.  However, when I went back to their British subsidiary last week, and asked them if that helped relieve the pressure, they said they had not really noticed, as the increasingly global nature of their business means they were busy all year round!